Is it me, or does this guy look like he just spotted his mother-in-law in the upper deck? 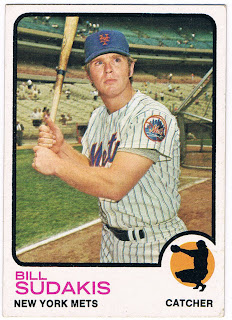 Card #586 -- Bill Sudakis, New York Mets
Though a late-series card, Sudakis wasn't even with the Mets in 1973. He was traded to the Texas Rangers before the season began, so he could serve as their designated hitter. The back of the card says Sudakis has been plagued by injuries throughout his career, the DH position was well-suited for him. Even though he had his best offensive season in '73, his knees were a liability and he ended up getting sold to the Yankees during the postseason. He split 1975 between the Angels and Indians and failed to get out of the Royals' farm system in 1976.

Before all that uniform changing, Sudakis was signed by the Dodgers in 1964 and came up through that team's system.
Posted by Chris Stufflestreet at 8:30 AM